portugal photo diary - at the villa

I thought that I'd share some photos from my recent trip to Portugal, it was my fourth visit to this lovely country and this year we invited some friends to come with us. I took a ridiculous amount of photos and whilst I won't bore you with nearly half of them there are still quite a few. We had a great time both at home (the villa) and out and about so whilst I still see my blog as a journal of things that I love including what I love to do, I thought it would be nice to put together a couple of posts to record Portugal 2014!

As with our previous holidays we were lucky enough to stay in this beautiful villa that belongs to a family member. It has 5 bedrooms, a huge lounge and dining area, great kitchen, outside dining area with BBQ, it's own pool, jacuzzi, outside shower, bedroom balcony, his & hers sinks, queen size bed - you name it. The villa sits on one of the many golf resorts that the Algarve is known for so we're surrounded by fantastic views down onto the golf course, across the valleys and to the sea. It really is a luxury place to stay.

We spent a good amount of time poolside, either reading or drinking and of course mucking about in the pool. I bought three inflatables for the holiday and for everyone to enjoy including a lilo chair and 2 rings; of which one was a doughnut design with a bite out of it - It's awesome! As I took all of these photos I'm not in any of them and I daren't do an 'in pool selfie' but you get the idea. :)

This little guy was wandering around by the pool and almost got stepped on so was safely moved to the garden.

We weren't often inside but when we were there was some sort of card and/or drinking game going on - for instance if you buzzed and gave a wrong answer on the movie quiz then you had to do a shot of tequila.

Whilst most of our time spent outside is beside the pool, there is another part to the garden beyond the BBQ area or 'bus shelter' as it's been dubbed. There are two sides the the seating area separated by a stone wall and wall sliding door, on one side sits the stone built BBQ and the pool etc whilst on the other is a tranquil seating area surrounded by grass and vines growing grapes. I love this part but don't use it nearly enough, it's the perfect place to sit and have a read in the morning before the sun is high.

These photos were taken along the driveway that goes around the side of the house to the back.

As a group we went out for a number of meals during the daytime and evening including my favourite restaurant; Fortaleza da Luz and others that we like to eat at each time we go to Portugal; Adega do Papagaio and Atlantico.

This was my salmon starter at Fortaleza da Luz, my main was chicken with mushroom and it was fantastic. There were at least three chicken breast in the dish that it arrived in and the vegetables with potatoes on my plate were delicious. Every one of us thoroughly enjoyed our meal at this cliff top restaurant, as we always do.

We always visit the parrot restaurant (real name: Adega do Papagaio) because it's fantastic value for money. A little out of the way this restaurant is hidden among the streets of Espiche and worth finding with all you can eat, cook your own on a hot stone for 13 euros.

The restaurant, Atlantico, looks out over Salema beach and sells the most delicious seafood, so much so that we visited twice during our two weeks away. Our table highly recommends the monkfish in saffron sauce and/or mussels because almost half of us had it on our second visit. 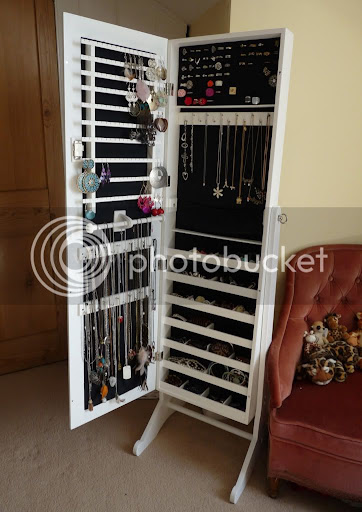 another level of jewellery storage